Recently the story broke about two Minnesota Conservation Officers (game wardens) who had the day off and were doing a little duck hunting in Southeast Minnesota.   Everything was going as planned when one of them suddenly realized the dog was missing.   At the time they were boating across a lake with the dog tethered to the front of the boat, but obscured by the blind material.

Upon making the realization that the dog was missing, it was quickly determined the dog, Dutch, had been pulled by its collar for upwards of a minute when it fell overboard.   The two wardens were quick to rescue the dog…but this is where it gets interesting.   Or does it?

You see, the dog’s owner CO Todd VanderWeyst determined the dog was clinically dead.   Now realize that clinically dead is not necessarily medically dead, but unless some quick intervention takes place things will be irreversible.

So what are two quick thinking, trained officers going to do?   Yup, you guessed it.   They performed CPR on the dog and brought it back to life.   Heroes to everyone who knows them and loved the dog.

But not so fast.   I don’t think these two officers were looking to exploit their escapade.   Moreover, I will be the first to admit that what they claimed happened is certainly possible, albeit highly improbable.   You see, performing CPR and having a successful save is one of the surest ways to gain publicity and hero notoriety…but I’m just not buying the story.   Not here…and not the countless dozens of times I’ve heard it first hand from rescuers suddenly thrust into that position.

Here’s the deal.   I’m a recovering emergency medical professional who worked almost 18 years as an Emergency Medical Technician (EMT), many of those years employed by an Advanced Life Support (ALS) ambulance service.   Have I seen CPR work…most definitely.   But in EVERY case that comes to mind CPR alone is not what saved an unfortunate victim.   It was a combination of the drugs that were eventually administered along with the electro-therapy (heart start defibrillators) that jolted life back into the lifeless.

More often what happens is a minimally trained rescuer during the moment of excitement simply doesn’t feel properly for pulses.   Hey, this is sometimes hard to do even for trained professionals who make their living in the business.   Thinking a pulse is absent, CPR begins and stimulates a body THAT IS NOT LIFELESS.   In the matter of moments a person is elevated to “lifesaver” status.

I always found it curious that ordinary citizens seemed to have a much higher success rate for CPR than trained professionals.   Sure, the argument can be made that often these folks are immediately on the scene and intervention is quick.   Yea, but I don’t buy that.   The point I am trying to make with all of this is be very skeptical whenever you read about the bystander exploits of performing CPR successfully – whether on a human being or a dog, for that matter.

I’m not taking anything away from the two game officers who obviously shared their story with the media.   Indeed, important lessons can be learned from the episode such as keeping a watchful eye out for your canine companions on such hunting trips.   But if they really expect me to believe they performed CPR on a dog, in a boat, on a lake then I am one gullible sportsman.   Besides, I challenge most sportsmen to even tell me where they would palpate a pulse on a canine they suspect was in cardiac arrest.   Especially a cold, wet canine dragged under or behind a boat.

I guess given similar circumstances I would have certainly reacted the same way with my dog.   What the heck!   The big difference, however, is successful or not on the revival, I would not have disclosed this to the world through the media outlets for scrutiny.   I understand these officers’ motivation to use the experience as educational (for safety), but I’m not buying the act they performed or the praise they are surely now receiving as successful lifesavers.

© 2005 Jim Braaten.  All Rights Reserved.   No Reproduction without Prior Permission. 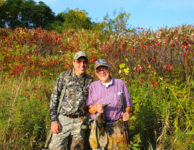 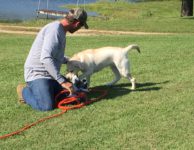 When The Tail Stops Wagging…Tough Decisions Must Be Made

“I hope your day improves.” Those were the words meant to comfort me as I left my veterinarian’s office yesterday morning. When I had arrived a half hour earlier my heart was filled with hope that my...