Required Reading For Anyone Who Ocassionally Has An Appetite

Recently I was checking out a web site that serves as the Academy Awards, so to speak, for blog sites pertaining to culinary dining and the food preparation world.   At first, my interest in the site was mostly out of curiosity in seeing how all these nicely constructed blog sites vied for the “best of” award in several different food blog categories.

In particular, one category immediately intrigued me.   It was the award for the “Best Blog Post” category.   I quickly grew curious…and I wondered what type of writing or what topic would lead to achieving an award such as this.   Let’s face it…with hundreds of different food blogs and another hundred or more posts within each blog…it had to be a really intriguing entry that would capture the judge’s attention for the best…and in fact it was.

What I discovered was a blog entry by Barbara Fisher who summed up my sentiments on eating meat better than I ever could have put into words.   Indeed, this entry achieved the Best Blog Post award because it defined those of us who eat meat as normal beings…and not the blood-thirsty carnivores that the vegan world would make us out to be.

Read the entire post, but consider these excerpts from Ms. Fisher’s award-winning writing:

“…if you cannot deal with the fact that an animal has to die so you can eat its flesh, then, you shouldn’t be eating that animal in the first place. It isn’t necessary for most humans to eat meat anymore–human knowledge of nutrition and the global marketplace have made vegetarian diets more pleasant, palatable and nutritionally sound than ever before.

So, if you don’t -need- to eat meat for its nutritive value, and it squicks you out to think of eating an animal, then why not just stop eating meat, and while you are at it, stop whining about it…”

“…Why do people insist on eating meat, but complain if it looks like it came from the carcass of an animal–which, even if it is minced and turned into sausage or trimmed into boneless cutlets, or cooked, shredded, ground and pressed into the shape of cartoon characters, is whence all meat comes? Why is it so hard to wrap one’s head around the fact that meat is the product of slaughtering an animal for the purpose of human consumption…?”

I found this post quite remarkable because even though Ms. Fisher doesn’t mention hunters per se, she most certainly understands the food delivery system and how generations of families are being removed from understanding the source where meat is derived.   Nobody knows this better than the sportsman who basically handles his kill from field to table.   Yet, we now exist in a world where some people think it is cruel to kill a cow and to take pleasure in grilling a nice steak.   Heaven forbid we spend an entire weekend chasing a deer around the woods so we can rejoice in the kill and the eventual sacrifice the animal makes for our dietary desires.   Unfortunately, some people just don’t get it.

I loved the title for Ms. Fisher’s post, “Meat Comes from Animals: Deal with It, or Eat Vegetables.”   That pretty much sums it up right there for me.

As sportsmen and as grocery-buying, meat-eating consumers…we most certainly do not need to feel guilty about eating the flesh of some animal.   Yet, we live in a world where many folks with this “holier than thou” attitude would like us to believe that craving venison or even farm-raised beef is some kind of terrible sin.   Truth is, we all make choices in this world and this includes what we consume in our diets.

So tell me, if I respect and honor a person’s choice to not eat meat and allow them to take pride in being a vegan…why then should this person not reciprocate with the same respect shown back to me?   After all, I don’t go around telling people how they should eat…why then should I listen to a person who thinks their meat-free culinary belief is better than mine?

It’s time this world wakes up and realizes that ever since the beginning of time there have been herbivores and carnivores roaming the planet and some facts just are not meant to change no matter how you might reason a rebuttal. 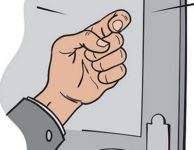