WOW! Take A Closer Look At This!

It’s been awhile since I’ve weighed in on the Ivory-billed Woodpecker and the controversy surrounding this bird.   I found the following release on one of my news wire listings…so I thought I would pass it along.

The Ivory-billed Woodpecker, once thought to be extinct, has been confirmed and documented in the Cache River and White River forests of eastern Arkansas.   Last Monday a team of research biologists led by Dr. Jerry Stinger was able to photograph what they believe is the best evidence to date that the bird actually lives.   Using a special Bird Cam apparatus that was carefully mounted on an old decaying tree, the researchers were able to conclusively document in vivid detail that the Ivory-billed Woodpecker is indeed alive and thriving in the Arkansas Delta.

“This should finally squelch the many skeptics and other birding experts who have long doubted this bird’s existence,” said Rahool Studdard, President of the Arkansas Birding Club.   “Over the past several months we’ve taken a lot of heat from folks who have asked to see more proof about this bird and now you have it,” said Studdard.   “We knew from the time this bird was first reported to exist that the evidence would eventually prove this finding to be one of the most significant discoveries during the past century.”

Berl Bartholomew agrees with Studdard.   Bartholomew has spent the past 30 years of his life on a quest to prove the Ivory-billed Woodpecker has survived deep in the Arkansas Big Woods.   He contends this is no accidental discovery.   In fact, there have been some very dedicated individuals who have known for years this bird, once thought to be extinct, is alive and breeding in the Delta.

Carl Richie, associate of Environmental Studies with The University of Central Arkansas was the lead technician who set up the equipment which captured the most recent evidence.   Richie admits that luck was a big factor in getting such a close-up shot of this rare bird.   “We picked out several likely trees and it was coincidental that the bird would land so perfectly in front of one of our mounted cameras,” exclaimed Richie.   “In all total we placed about 22 specially designed cameras strategically out in the woods and we figured it would only be a matter of time until the bird perched before one of the heat/movement-sensitive cameras.”

The camera actually captured three images of the Ivory-billed woodpecker, but unfortunately only one of the images proved to be sharply in-focus.   Yet, the detail captured in the photo has bird experts around the world simply amazed.   Dr. Stinger admits that when he first seen this most recent image of the Ivory-billed Woodpecker it brought tears to his eyes.   Others researchers have experienced similar emotions after viewing this spectacular image.

“It’s no accident that we released the details of this most recent discovery to coincide with April Fool’s Day,” offered Bartholomew.   “Folks have been making us out to appear like fools for years because we have not been able to point to clear, conclusive evidence of the Ivory-bill’s existence.   We wanted to release this most recent evidence just to prove who the real fools are among us.”

Like Loading...
Older
Cleaning Out The Freezer In Style
Newer
Step Back In Time At This Destination 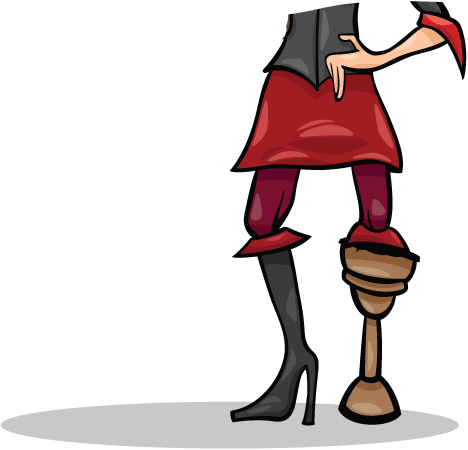 10 Sure Signs Today Isn’t The Day You Will Score On A Deer.

FRIDAY HUMOR: How The Next Presidential Election Gets Settled

Even though this reads more like a good Sven and Ole joke, I guess because we’re getting into the political season I might as well go with it as it was provided to me.   Enjoy the weekend! The 2012 Presidential election was too close to call.  N...