What Does It Mean To Be A Sportsman?

I ask you…what does it mean to be called a sportsman?   I presume it means different things to different people, but on the whole what does the word “sportsman” conjure up in your mind when you hear the word uttered?

The Merriam-Webster Dictionary defines a sportsman as:

“a person who engages in sports (as hunting or fishing)”

Now this may certainly be true, but it doesn’t really define the true essence of what it means to be “a sportsman.”   So, let’s look to Webster under sportsmanship:

“conduct (as fairness, respect for one’s opponent, and graciousness in winning or losing) becoming to one participating in a sport”

Yea, I like the word fairness and graciousness, those are certainly nice attributes to one who considers themselves to be a sportsman.   Yet, the hard and fast definition still escapes me.   Another dictionary I consulted suggests a sportsman is “one who plays by the rules.”   I suppose so.   But again, playing by the rules in my mind is only one criteria among many for calling yourself a sportsman.

I find it interesting that one blogger is currently writing a series of 7 blog postings on what he feels it means to be “a sportsman.”   And while I concur with some of what he describes as “sportsmanlike behavior,” I can honestly say this particular blogger interjects way too much politics into defining a sportsman.   In my mind the true sportsman is a non-political creature.

There are lots of organized groups who call themselves “sportsman’s clubs.”   What exactly does that mean?   In most cases the only requirement to belong is to pay your annual dues.   To my knowledge there are no additional standards that one must surpass to be eligible for membership.   Granted, this is a general statement that may not always be true, but….

The point I am trying to make here is that the word “sportsman” has no definitive meaning that appears to have universal acceptance by everyone.   I think most of us can agree that being called a sportsman is a good thing, but it’s meaning can vary depending upon who is attempting to define it.

So, let me take a stab at creating a more comprehensive definition, after all, this is the Sportsman’s Blog.   Here goes… a sportsman is:

“One who pursues fish and game with deep passion, conviction and respect for his quarry while honoring his heritage, adhering to his guiding principles, yet fostering a sense of fairness and compassion for others with whom he shares the fields and waters.”

Now it’s your turn.   How do you define being called “a sportsman?”

Like Loading...
Older
Guess Where I Go When I Get Writer’s Block?
Newer
Smile Mr. Whitetail…You’re On Candid Camera! 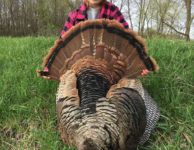