I Have A Lot Of Respect For Trappers

This past Saturday I attended a small trapper gathering and I must say I always walk away from these events having learned a great deal.

Most years the big take-away is learning about the habits and activities of various furbearers and man’s attempt to catch them.   Honestly, you can tip your hat to the bowhunter who ends their season with a nice new mount for the wall, but I will always have more respect for the trapper who knows the ins and outs of his passion so much that he can fill a pickup load of beaver…or coyote…or some other crafty, wary species. 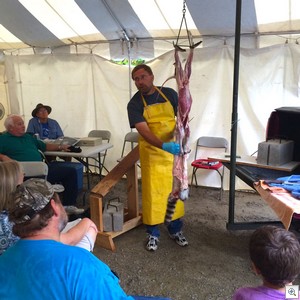 Trappers gather around to learn the finer points of fur handling and preparation.

Indeed, in the outdoors world for my money the accomplished trapper is the real rockstar deserving the utmost respect.   This person has to know his sport so well that he can predict that a critter will step on a few square inches of a trap pan in order to achieve success.   Certainly I’m not discrediting the hunter in any way.   Instead, if you’ve never been closely aligned with someone who traps to learn what it takes…you’re missing a truly wonderful outdoors experience, in my opinion.

Now, some might say trappers do it for the money.   To that I would say GET REAL!   The money?   Oh, sure there’s the money element involved with preparing and selling furs, but very few trappers I know make much more money then they end up spending on supplies, on gas to run their line…not to mention the hard work involved with catching and putting up fur in preparation for auction.

I’ve been a recreational trapper since the age of 15 so I know what it takes.   Commitment.   Ambition.   Discipline.   Positive attitude.   Those are just a few of the many qualities that goes into a successful trapper.   And while money can help motivate a person to get out of bed each morning to check the lines…it simply does not very often make a living for many people. 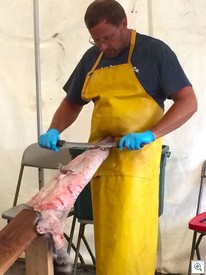 Hide preparation through fleshing the fat and gristle off the leather-side is an important and challenging skill.

As I watched Leon Windschitl from the Minnesota Trappers Association give his demonstration showing the finer points of fur handling, it suddenly occurred to me how much work is involved with trapping.   First off, there’s the work phase where you need to outsmart the animal.   Specialized tools, techniques and tactics might work in some areas, but then not in others.   There’s no guarantee for success in trapping, just like there isn’t in hunting or fishing. 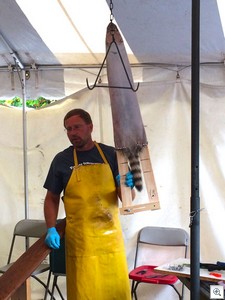 Stretching the hide showing good size and conformity to accepted standards will bring top dollar at the market.

Now, some trappers might stop right there and simply sell the animal in the carcass to the fur house.   I’ll admit, this is what I often do because my process for skinning and preparing is not a streamlined operation.   Others, however, realize the work is only beginning.   Skinning the critter (depending on your skill level) might take five to ten minutes or more.   Then comes the fleshing and stretching aspect…not to mention the combing and cleaning that is often necessary to make the fur look its best.   Even the stretching and the drying demands time and lots of attention.

All in all that $30 raccoon is hardly easy or quick money for the trapper’s pocket.   As a trapper, to do things the correct way takes lots of time, patience and effort often when weather conditions are less than ideal.

Especially this year.   Preliminary fur markets are looking somewhat depressed so trappers will likely have less competition on their lines.   That also means less money in the pocket when the seasons end.   Indeed, this year when you see trappers out tending their traps realize how this year more than others the folks setting steal in the river ways and fence lines are doing it for a true love of the sport…and not for a means to get rich in the pocketbook.

Yes, I have a lot of respect for trappers and the sport of trapping.   Always have and always will.

As a blogger most folks would agree I’ve been pretty pathetic about my writing efforts over the past several months.   No excuses.   Well, I could give you a laundry list of reasons I haven’t been putting pixels on the computer screen…but it really serves no constructive purpose, now does it?

An outdoors writer associate of mine has a blog and perhaps he is most honest with his blog readers.   He calls his blog the “Ocassional” blog.   I guess the connotation there is don’t expect much, I’ll write something when I damn well please.   Honest…indeed.   Yet, not likely to send those search engines spinning with newfound content that they all like to feed on.

Honestly, I’ve done a bit of soul searching about this whole process of blogging.   What I’ve discovered is the older I get the less I care to write about life experiences as I’d rather just sit and cherish them.   At least, that’s the way it is for me.   There was a time when I would experience something new and I couldn’t wait to share the experience.   I’m sad to report that sensation has somewhat faded.    Oh, don’t get me wrong…I’ve not given up on blogging.   Rather, I would like to think I have just matured during the process. 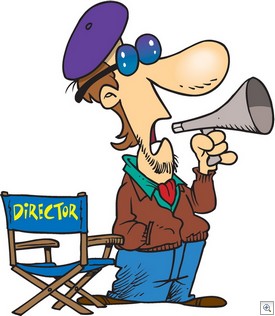 Good or bad…there’s one person and only one person who controls the content of this blog. Guess who?

When I began blogging almost ten years ago (anniversary in just a few weeks) I did it for me.   I know that sounds rather self-centered, but realize back ten years ago very few people read blogs.   Hell, for that matter most Internet users lacked any understanding about what blogs could potentially be.   Back in those days you jotted in a blog much like you would log an entry into a personal diary kept near your nightstand.   Big difference, this diary entry was available to the public AND if you slighted someone in any negative fashion you could be held legally liable.   In a diary…well, they never even knew about it.

Oh, I’m not going to get into how over the past decade blogging has evolved into the powerful medium it has become to express feelings.   I’ll save that for someone else to do.

However, I do want to express how I think blogging, or more specifically many bloggers, could be well served to remember why they got started.   In the beginning it was people who just had something to say.   It was writers who had a burr under their saddle, so to speak, and needed a soapbox platform to release some pent up feelings on a particular matter.   It was bloggers who wrote from the heart, and not from the pocketbook.

You see, I think blogging for many has become too commercial.   Too predictable.   Too much like a big promotional message…whether the slant is to perform self-promotion or that for a company/product.   I may have mentioned it before but I’ve passed on opportunities to blog for big name outlets because I did not want my words or thoughts to be tainted by sponsor bottom lines, future advertising opportunities, or the like.   In fact, when you see my “byline” it’s because I have something to say.   Not because my name and reputation is being used as a mouthpiece.

Oh, sure, if blogging is your livelihood and there is a financial interest at stake, it takes on a whole new purpose.   In contrast, when you go for two months without as much as uttering a single word on your blog.   Well, that pretty much proves you don’t answer to anyone…at least from the sponsor side of things.

As we inch closer to fall and the fall season so many of us adore, I’d like to think you will see more posts here detailing my rambling thoughts on this outdoors matter or that.   On the other hand, if I fail to check in on a weekly or even monthly basis I hope you’ll understand.   I write when the urge to do so presents itself.   In other words, I write when I have something to say, not when there’s something another person wants me to tell you.   Understand the difference in the various blogs you read.