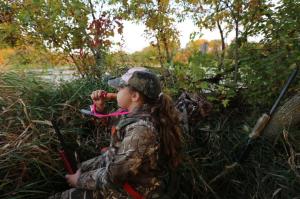 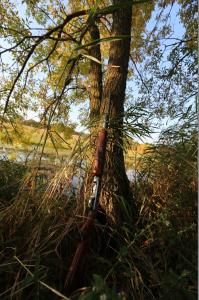 This Winchester Model 12 has been hitting the duck sloughs now for 4 generations of Rost Family duck hunting. 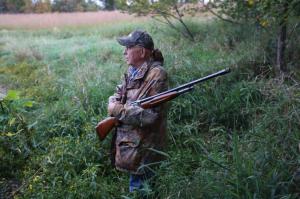 Ready, willing and able…now if the ducks would just cooperate. 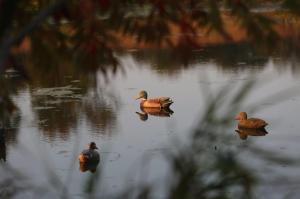 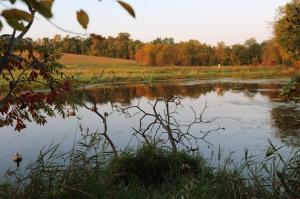 Nothing beats early fall at the duck pond…just wishing it wasn’t temperatures in the 80’s. 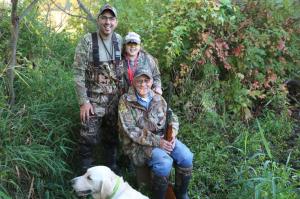 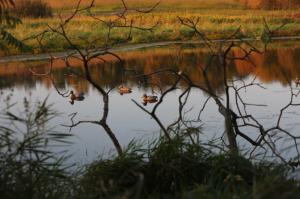 Opening Day turned out rather slow…not much action this time out. 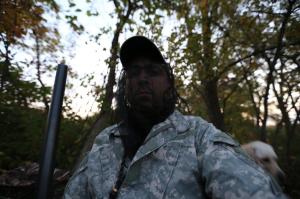 With unseasonably warm temps(25+ degrees above normal)…mosquito netting was nearly as important as wearing camo clothing. 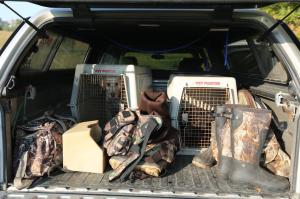 Is it REALLY time to go home so soon? 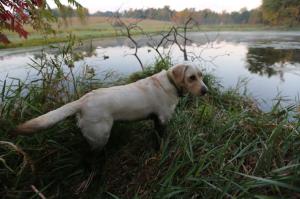 Dad, where are all the ducks you promised me when you got me out of bed this morning? 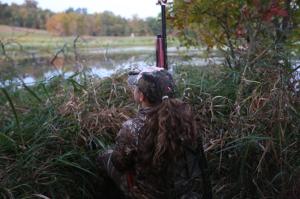 Ponytails in camo…a very welcome sight in any duck camp.

Put A Smile On That Hunting Face

I have a pet peeve.

Actually, I have several pet peeves, but one in particular this time of the year really irks me.

It’s a picture of sportsmen displaying the success of their adventure only to show little to no excitement in the associated pictures.   Really?   You put all that hard work and dedication into bagging a nice buck or a game bag full of roosters and you can’t put even a slight smile on your face for the camera? 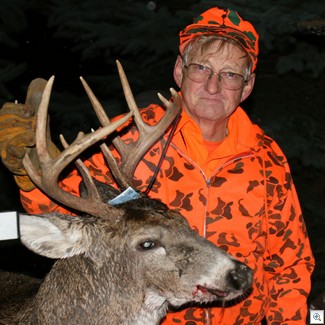 Why display a somber looking face like this hunter when you have every reason to show happiness.

I know that if I was a judge for a hunting photo contest there would be a preliminary factor that would toss out at least a third to probably a half of all pictures submitted.   No smile…no chance of winning my photo contest.

Look, I get it that you’re a hunter and you want to look rugged and tough.   I also get it that maybe you’re not big on pictures being taken and a smile doesn’t come naturally.   Tough!   As a sportsman this fall who anticipates to be in a position of success I want you to condition your mind to smile when a camera is around.   Maybe few people look at the smile and they focus on the nice rack, but I will notice whether a smile is present or absent. 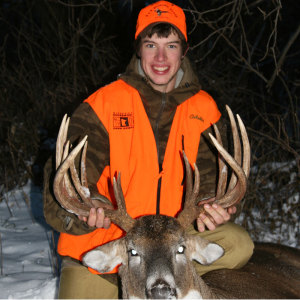 This hunter got it right, besides…with a deer like that how could you not show a big ol’ smile.

Okay, well maybe that last statement isn’t exactly true.   But seriously, why should I get excited about your deer or your day spent in the pheasant slough if you pose with nice critters and you don’t even appear happy.   I figure there must be something inherently wrong.   I think to myself if I had shot a deer like the one I am seeing I know I would be exuding excitement that would show for the camera.   Maybe, just maybe, I am mistaken and the game being shown is not that big of a deal.

I know most hunters don’t think about this until it is too late…but these pictures last a lifetime.   That wild turkey or pile of ducks or whatever deserves a little crack of smile.   A smile shows you are genuine.   A smile shows you’re proud of what you are posing by in the picture.   Most importantly, a smile is what invites other hunters to share in your raw excitement of the moment.

This fall I want all of my hunters to pledge they will put smiles on their faces when posing with their game for pictures.   It’s such a little thing to ask, but yet it adds so much to the quality of the picture.

Beware The Politician Who Wears Orange

Blaze orange has a powerful meaning to most outdoorsmen.

We all know the intended purpose is for safety’s sake, but I’m not one who takes it lightly when putting on the so-called uniform of our fall outdoor passions.   After all, the wearing of blaze orange helps to identify who we are even among a crowd of people.

Take the police officer who sits in the local dinner having breakfast.   I’d venture to guess most patrons know of their presence in the restaurant and likely pay closer attention to his/her actions.   With the wearing of the uniform comes a certain default respect, but it also carries a bunch of expectations we strive to see confirmed in our mind.

We expect that officer to be polite, an upstanding citizen in their actions, and approachable (or friendly) in their mannerisms.   We acknowledge how the badge and the uniform condition our minds to observe for behavior to confirm these preconceived notions.   It’s human nature to match what a person wears with how they are supposed to be or act. 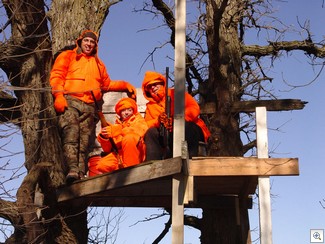 The same goes for hunters.   Walk into any busy dinner on a November Saturday morning in rural America and you are likely to see orange-clad hunters reliving stories of the hunt.   Good or bad, these hunters are confirming expectations in people’s minds about what they are seeing.   Are they acting proper?   Are they acting respectful?   In other words, to the non-hunting public the behavior they are witnessing is acting as the poster child, so to speak, for all the rest of us.   We get judged by the general public based on this observed behavior.

Yet, when someone wears orange we also make judgments amongst ourselves.   Take, for instance, the politician who appreciates how they need the sportsman’s vote in order to get elected to public office.   What better way than to show he/she is one of us than to don the orange garb we wear into the fields and woodlands.   Does wearing orange alone make you a sportsman?   Does a TV commercial showing clips of a politician in hunting/shooting scenarios wearing the garb make that person a sportsman?

In Minnesota we have one such candidate, who I won’t single out, who feels it necessary to show he is a hunter and shooter.   Throughout the commercial it shows various snippets of him hunting in the outdoors proudly displaying the orange.   Only problem is, the commercial appears as if it was filmed in mid-summer.   It likely was.   It’s easier to throw on some orange than it is to make the surrounding landscape appear to be the correct season.

Now, I have no idea nor do I care (the candidate is from a different voting district than me) if the politician is a legitimate sportsman.   For that matter, he likely comes from a family deeply rooted in the outdoors.   That doesn’t matter.   What matters to me, and it should matter to you, is when candidates strive to appear as someone when the overall evidence is not convincing.

Honestly, if a candidate with good morals and well-meaning ability is a sportsman I don’t care if they are Republican or Democrat alike.  What I despise, however, is someone who tries to look like me simply to get my vote when by all other measures things don’t appear to be sincere.

This fall all eligible voters throughout the country will have elections coming up in November where we are asked to make important choices.   All I am asking is don’t be fooled by outward appearances and political rhetoric.   There’s much more to being a true sportsman than buying a blaze orange coat and then looking pretty for the cameras.

Okay, so I wrote this post this morning and now this afternoon I stumble upon a picture showing the unnamed politician in my post.   Here is the picture apparently found on Twitter (and linked to from the GOP website): 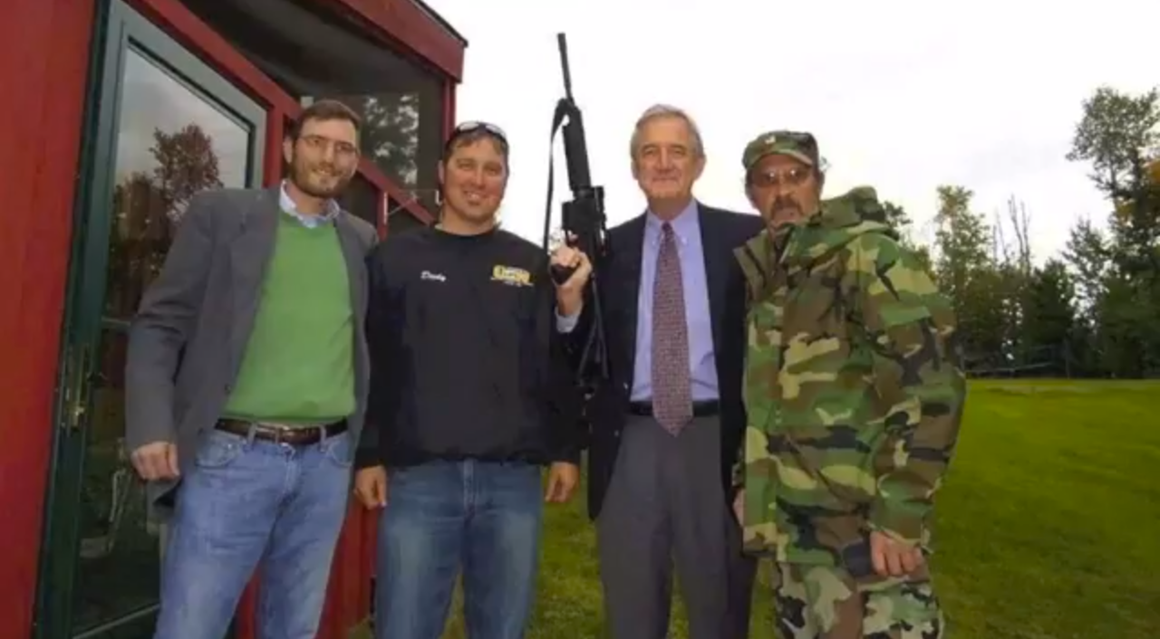 Note, indeed, the politician, Rick Nolan (pictured here holding a so-called “assault weapon” that he’s gone on record supporting a ban on) is not wearing blaze orange in this photo, but he seems to proudly be holding said gun.   Worse yet, look at his finger on the trigger.   Yup, one of the quickest ways you can tell how familiar (or shall I say unfamiliar) a person is with a gun is their penchant for placing a finger on the damn trigger when it shouldn’t be there.   REAL gun folks know the finger doesn’t touch the trigger unless you are ready to shoot.   Sometimes you just can’t make this stuff up and have it more obvious.