I used to get out of bed in the morning and not give much thought to world events.   Most happenings on the news seem so distant…with little, if any, impact on my life.   Not anymore.   Now in the mornings before I turn on the television news a part of me wonders what catastrophic event is currently taking place that I am now just about to hear when I click on the TV.   Yup, a part of me braces to anticipate the worst.   Even though we are surrounded by lots of good things that happen in our lives daily, it’s foolhardy to forget we are also immersed in a world of true evil.   Terrorists like to cast fear and worry…but they also like to act when we let our guard down and become susceptible to their insidious acts against mankind. 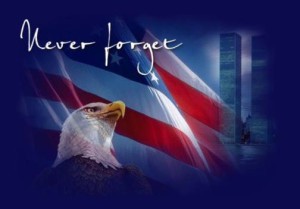 Perhaps we were once naive to think it could never happen to our country…that some group of radical people could use the freedoms enjoyed in our society to cause so much harm against us.   But they did.   We watched it happen before our unbelieving eyes.   Like most others, I was glued to the television to see what would happen next.   It seemed as if I went through different phases upon learning of the terrorism act.   First amazement, next disbelief, then came an urge to be close to family and gather together all who were important to one’s life…and the emotions continued in the hours and days to come.   All in all, we became suspicious of everything and nearly everyone.   When people acted strange we would view it with heightened curiosity and seriousness.   Still do to this day.

We never thought we would see a day(s) where the planes stopped flying (well, commercial ones anyway).   Indeed, 9–11 gave us a taste of what life would be like turned upside down.   Imagine if cell phones no longer worked.   Imagine if the Internet was completely out…or even spotty and unreliable.   Imagine if fuel and electricity…the very things that power our society were suddenly in very short supply.   How would we react?   Well, it caused me to develop a plan.   Family knows that priority number one is to assemble at our home as soon as possible.   Once we’re all together…we will then assess the situation and gather needed resources.   But the plan can only work when we are all safe and together no matter what it takes to make this happen.

Take Nothing For Granted

As many of you know I have become an avid ham radio operator in the past year or so.   While so many people laugh about what they perceive as playing with outdated technology, I see it more as a time-proven reliable technology.   In fact, what most hams practice for are the type of situations we hope we never have to use in reality.   In other words, if the world is relying on hams to communicate…it likely means some dastardly event has taken place to cause it and life will not be carrying on as we once knew it.   Yes, I have both the equipment and the know how to communicate over a wide area…and potentially around the world given the correct conditions.   Best of all, this can be powered by batteries and recharged from my vehicle.   As landline phones slowly disappear and we all depend on phones carried in our pockets…you tell me if you can’t imagine the potential problem with this situation.   Yup, don’t take things for granted and have a backup means to communicate.   Wise to have a backup for everything you do in life.

Greater Appreciation For All Men & Women Who Serve

I really don’t care what your feelings might be about why we went to war.   Nor do I care about the politics, at least to some degree, that are seemingly woven into all aspects of our life these days.   Yet, what I do care about are the fellow citizens who fight to keep us safe.   Whether soldiers fighting in a war zone…or cops fighting in some nasty cultural uprising…we have brothers and sisters doing a tough job for little reward.   They do it because they care.   We all need to appreciate that.   When is the last time you thanked a soldier for their service?   When is the last time you purchased a cup of coffee and a donut for a police officer?   We all owe these people a lot and it takes so little effort on our part to show some proper appreciation.   These are the folks on the front line acting as a buffer keeping us separated from evil.   They sacrifice so much to do what they do.   If there is one good thing that came out of 9–11 it’s that these heroes in our life have been given an opportunity to shine and be respected by all of us.   Let’s be sure to do that!!