I have this friend who likes to poke fun at people who do stupid things.   Take, for instance, the time one of our buddies backed his boat trailer into the water and then got talking with some people who momentarily distracted him.   Yup, you probably guessed it…he forgot to put the drain plug back into the boat before it hit water.

Well, to make a long story short…by the time he figured out his predicament the boat had taken on lots of water to the point gear was floating on the bottom.   It’s about this time my other buddy is famous for saying, “I remember my first beer, too.”   The connotation being that someone just learning how to drink alcohol is generally not too aware of the stupidity that can result.

In many ways the concept of “remembering my first beer” sort of relates to my first experience at SHOT Show, too.   I was a rookie.   I did lots of stupid things.   I was intoxicated, so to speak, of the sheer scope of the event.   In other words, the first time I walked into the Las Vegas Convention Center back in 1988 to attend the SHOT Show a sensation of nervous excitement raced throughout my body.

Now, keep in mind back in 1988 the number of show attendees was just shy of 20,000 people.   Last year, in comparison, there was about 64,000 people at the Sands Convention Center which I’m guessing has a footprint smaller than what the larger L.V. Convention Center once offered. 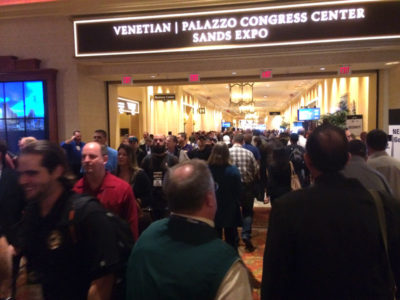 I attended this 1988 show because my boss (at the time) told me to go with the intent of making some new contacts to sell them calendars.   Truth be told, I failed miserably.   I came home with a pocket full of business cards and none of them were leads for future business.   In fact, I quickly discovered how people don’t go to SHOT with the hopes of peddling products or services TO THE exhibitors (albeit, to some extent it does happen)…nope, folks go to SHOT to BUY FROM the exhibitors who spend big bucks on fancy tradeshow displays.

And you see, at that first show I discovered how companies had a sneaky little trick to distract you.   While you might be wanting to tout the benefits of the products and services you can offer, they have new products on display that makes your head spin with excitement and intrigue.   I quickly learned the proper protocol for SHOT or any tradeshow, for that matter.   In fact, today even more so than three decades ago, SHOT management strongly discourages any selling by roving “carpetbagging” as this practice undermines the tradeshow concept.

So, if you’re walking the show aisles and not selling, you must be buying products, correct?   Well, yes and no.   At this first tradeshow I discovered how the exhibitors wanted to “write orders” and have the product shipped to your store.   That didn’t mean they would necessarily have products for you to “grab and go” with to fill a shopping cart.   Nope, found that out when trying to leave the show.   Bags were often inspected and a “bill of sale” best be available as proof of purchase.   And samples, oh boy…a person better have a good story.

Today, however, mostly with the size of the tradeshow show tripling from those earlier years…show floor selling doesn’t appear to be as big of a deal.   While all bags are still subject to inspection upon departure, it seems to now rarely occur. 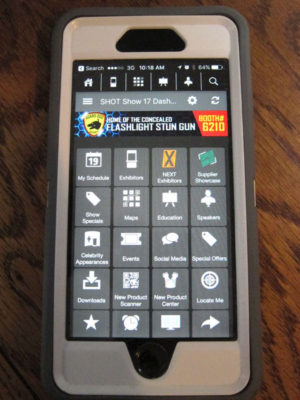 The new smartphone app is a welcome tool to both navigate and learn about what is happening at SHOT.

Okay, so what’s it like to walk your very first SHOT Show?   I guess if I had to sum it up in one word I would say “disorienting.”   Honestly, the SHOT Show is so big and vast that without a good plan of attack you just will not see it all.   A person needs paper maps, smartphone apps, and the confidence to ask someone who can help show you the way.

Aside from that the show will wear you down.   Yes, it will even make your feet bleed.   Just ask my buddy, Jeff, who chose not to take my advice and wear comfortable shoes while at the show.   His white dress socks having spent the day inside a pair of leather dress shoes made for blisters and bleeding.   Oh yeah, once the “dogs start barking” the discomfort will not stop biting likely for the remainder of the show.   Be warned and stay aware.

Another thing most people forget about is staying hydrated.   After all, the SHOT Show is in the desert and your body can wear down quickly when fluid intake is lacking.   Oh, and perhaps this is a good point in time to talk about the proper fluid, too.   Yes, the show is in Vegas and yes, the alcohol has a tendency to flow(especially in the evenings).   Alcohol does not do well to hydrate a body, in fact, in most cases it is rather counter productive.

So, by now you might be wondering why the hell would anyone want to go to SHOT.   First off, not just anybody can get in…you must be a bona fide member of the outdoors industry with credentials that seem to get more strict each year.   Oh yeah, and it costs lost of money in travel and lodging; Vegas is not the cheap destination your parents once knew.   On top of that, the tradeshow can be overwhelming in so many of the ways I just explained.

Honestly, I go for the friendships.   Over all my years I have met many outstanding people in this industry with whom I have developed very cherished friendships.   To me that is what SHOT is truly all about.   Renewing acquaintances and discovering new fascinating people to connect with in the future. 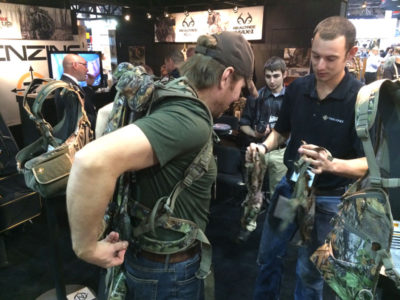 This first-time SHOT attendee was so overwhelmed by the experience I could hardly get him out of the Tenzing booth.

Of course, this is only an estimate, but I figure conservatively I have walked at least 750,000 steps while attending SHOT over the many years.   This works out to be over 300 miles of tired, sore feet walking on carpeted cement in various cities such as Las Vegas, Orlando, Houston, Dallas and New Orleans.   No wonder I’m tired.

Yet, in 1994 a book author named John Roskelley handed me a signed copy of his new mountain-climbing book, Stories Off The Wall.   In the book he signed and wrote, “To Jim, all adventures begin with the first step…”   Advice I have not only taken to heart in my life, but subsequently offered to many others who were contemplating a new life journey.

Indeed, I would say how the first time a person takes steps inside of the SHOT Show it becomes a transformational experience; an experience that will change how you appreciate the shooting and outdoors industry from that day forward.

To all those folks who will be taking their very first steps at SHOT this year, I’m excited for what you are about to witness.   …And oh yes, “I remember my first time.”

Like Loading...
Older
Time To Quit Hitting The “Snooze Button” On This Blog
Newer
Remembering Past Minnesota Fishing Openers