Why This SHOT Show Will Be My Last

I’ve been blessed. No doubt about it. Having now attended 25 out of the past 27 SHOT Shows has been an awesome experience. Yet, there comes a point in time where one must move on.

Over the years while attending SHOT I have experienced some awesome venues and host cities. Dallas, Houston, New Orleans, Orlando, and of course, Las Vegas. Each location established its own unique personality and I watched the SHOT Show grow into what it has become today–one of the largest trade shows held annually in the U.S.

Over the years I’ve seen lots of unique and revolutionizing product innovations. After all, that’s what the SHOT Show is all about, isn’t it? 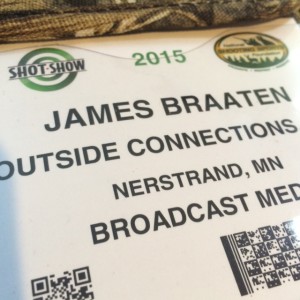 Perhaps, but what SHOT has provided most to me has been relationships. Relationships with fellow outdoors writers, gun buyers, exhibitors, manufacturers reps, industry movers and shakers, and many others who share a common interest of shooting and the outdoors.

The SHOT Show is an industry show meaning you can’t gain access without credentials. During the early years those credentials were pretty easy to establish. No more. Today, access to SHOT requires an approval process that certainly is meant to weed out the marginal attendees.

Indeed, SHOT has evolved into a highly regarded and respected industry trade show holding almost mystical dream-like possibilities for the average enthusiast who may never get to attend.

So, why would a sane person give up all of this for future years? It’s a question I’ve asked myself many times over the past year as I’ve pondered this difficult decision. I honestly have no specific reason that sounds good to articulate. Just that sometimes you feel it’s time to move on to new experiences and break out of the routine.

Does this mean I will never attend another SHOT at some time in the future…probably not! Yet, I have already made commitments for both 2016 and 2017 that makes SHOT attendance those years out of the question.

In the coming days leading up to SHOT Show 2015 I plan a few posts reflecting back on my past SHOT experiences. I hope you will find them insightful, interesting, and perhaps even a bit thought-provoking.

SHOT holds lots of possibilities for everyone who attends. A good SHOT Show can make or break many businesses. Dreams come to life by upstart vendors banking on a new product’s acceptance. There’s local gun store buyers with a keen eye for those products that set them apart from the big box stores. Everyone who attends SHOT has goals and objectives to achieve.

This year I plan to soak up the SHOT Show experience with a vision of a person who knows they won’t be back next year or even the year after. It’s time for me to step back and focus on some other important things in my life.

During the next few Januarys SHOT will become an opportunity cost as I take my 6y/o daughter to places that help live out her dreams. Oh, yes…Disney strikes the same sort of magic in the hearts of youngsters of all ages much as SHOT has done for me for over two decades.

Indeed, the SHOT Show is very much like a temporary theme park for those of us who enjoy guns and the outdoors. But like everything else in life, there comes a time to say goodbye!

Ever since 2003 the Governor of Minnesota, then Governor Tim Pawlenty, has honored the deer hunting tradition in our state with the Minnesota Governor’s Deer Hunting Opener celebration.   It mostly just amounts to a bunch of pomp and circumstance for the Explore Minnesota Tourism Department and the Minnesota Deer Hunter’s Association, but rightly so it spotlights a big industry in Minnesota which includes lots of orange-clad participants who enjoy their time spent in the woods.

In full disclosure, back in 2006, I got to host Governor Pawlenty here at the farm for that annual deer hunt.   Each year it bounces around to different areas of the state and this year the 2013 celebration is in Fergus Falls, Minnesota beginning on Friday and lasting into Saturday.

Okay, further disclosure I am not a big fan of our current Governor Mark Dayton.   Fair to say we don’t share many similar views on politics.   But apparently we also don’t share similar views on deer hunting.   Ever since becoming governor he makes a token appearance and departs the GDHO event stating he is not a deer hunter and doesn’t want to take part in the actual hunt.

Therein lies my frustration with the current Minnesota Governor.   Oh, sure, when he took office he was quick to leave his own impression on the sporting world by starting the Minnesota Governor’s Pheasant Hunt.   But he refuses to hunt deer.   Why?   Claims he’s not a deer hunter and doesn’t care to shoot a deer.

Fair enough, but there’s much more to deer hunting than actually pulling the trigger.   How the hell is a politician going to adequately claim they can relate to me as a sportsman when they refuse to experience the sort of outdoors activities that fuel my soul.   In Minnesota each fall there are over 10 deer hunters afield for every pheasant hunter, and that ratio is growing each year as folks give up on the AWOL pheasant population.

When Governor Pawlenty hunted with me he spent time with other hunters in my camp.   He learned what motivates a person to get up at outrageously early times, dress in layers of warm clothes, and then head for the dark woods to sit and wait.

When Governor Pawlenty hunted with our group he got to experience nature come to life as the sun peaked over the horizon to slowly warm the frosty morning air.   He witnessed nature at what I believe is its finest hours of the entire day scurrying to life.   Indeed, the deer hunter is sitting in a balcony theater seat watching the drama known as nature unfold 360 degrees in all directions around them.   How can life get any better than that?

Deer hunting is very different than pheasant hunting.   Oh, sure, both activities enjoy nature in its own unique way…but calling yourself a pheasant hunter in no way provides any understanding as to how life as a deer hunter is enjoyed.   There simply is no substitute for experiencing deer hunting first hand.

It’s almost like the backyard bird watcher who enjoys feeding and watching birds from the kitchen window.   Gives them a better sense of nature when they can observe it with their own eyes.

But remove that wall and pane of glass and suddenly it opens up a new dimension to be sitting out in the woods motionless and have a Black-capped Chickadee land on the barrel of your rifle completely oblivious to your presence.   Or a flock of wild turkeys completely surrounding your tree scratching in the leaves unaware they are being watched ever so closely from a perch above.   Or a pair of red squirrels frolicking in the nearby tree attempting their death-defying acrobatics.

Notice I made no mention of deer.   That’s right.   Deer hunting is so much bigger than just killing a deer and bragging about it to your friends.   Of course, I would expect a non-deer hunter to assume bringing home the venison is the sole motivation for being in the deer woods this time of the year.   Yet, that’s the sort of misguided notion people have about things when they don’t take time to experience an activity first-hand for themselves.

Surely, if deer hunting is important enough for 500,000 Minnesotans to spend countless hours out sitting in the trees this coming weekend, our state’s chief executive officer can share a few hours of his precious time discovering for himself the many wonders of deer hunting.   Governor Dayton, deer hunters deserve that sort of respect and showing of support from you when acting in the capacity of governor of a sportsman-oriented state like Minnesota.

If there’s one thing many bloggers fail at it’s networking.   Now, I’m not talking about networking via social media, like Twitter and Facebook.   No, I’m talking about good old fashioned face-to-face meeting like they used to do it back in the old days.   In my opinion nothing solidifies a friendship quite like a firm handshake and a few stories passed back and forth.

During the past several years a small group of us bloggers have met during the SHOT Show in Vegas for a social hour.   Those times are always fun and it allows folks to get caught up on happenings.   Moreover, it builds a bond with other like-minded bloggers that helps to energize a person’s future creative output.

It has long been my hope to gather a regional group of bloggers together for a fun rendezvous here in the upper Midwest.  I’ve learned that is not always an easy task to accomplish due to the fact we all live busy lives, but important nonetheless.   So, if you blog about the outdoors and are within reasonable driving distance of the Twin Cities, I urge you to make plans now.

Here are the plans:

If you have any questions please contact either Michelle Scheuermann, Chris Larsen or me.   If this goes over well maybe next summer we will plan a similar gathering at some lake to focus on a little fishing.   Hope to hear from you soon.