Back At The Lodge — A New Podcast

One of my absolute favorite times in the outdoors comes at the end of the day when you are back in camp and rehashing all the memories made just hours earlier.   It’s a time when jokes are told…stories become legendary and occasionally a person gets to brag about what went right making others just a wee bit jealous.

When Michelle Scheuermann and I were trying to think up a name for our new podcast we wanted something with meaning.   We wanted something that quickly explained what the show was all about.   Indeed, the concept of being back at camp after a long day spent outdoors had a certain appeal…not just because it’s comfortable, but because sharing thoughts and feelings is what takes place when good friends gather in such places. 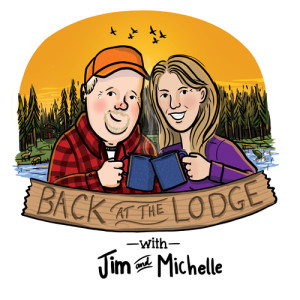 That’s how Back at the Lodge was born.   The concept of relaxing near a campfire with new and old friends alike.   It’s the time of the day when everyone gets to say what’s on their mind.   It’s a time when you sit near an open campfire (or perhaps a fireplace) and let those tired ol’ aching muscles in your body begin their recovery.   Yet, best of all…it’s when not only do you get to look back on what has just recently happened, but anticipate an even better tomorrow spent outdoors with brand new stories and experiences soon to tell.

I’m not really sure who’s idea it was to do a podcast.   I guess I will give that credit to Michelle.   Longtime readers of this blog might remember how back in 2006 and 2007 I produced 9 episodes of a podcast called The Sportsman’s Blog Podcast.   It was a fun experiment, but became very time consuming arranging guests and coordinating schedules just to produce.

As Michelle and I have learned, some things really don’t change.   Coordinating schedules can be frustrating as hell.   Because we live about an hour apart here in Minnesota, it means either hooking up midway at some noisy restaurant with our recording equipment or one of us driving to the others’ home.   Sure, we could more easily Skype our sessions and then use that recording, but so far we have resisted doing so as it sort of goes against the concept of meeting face-to-face “Back at the Lodge.”

So, what can listeners expect to hear by tuning in?   Ha!   That will change with any given day.   We don’t go into these sessions well scripted for the most polished audio recording possible.   We don’t want that.   We want you to feel as though you are joining us in a casual conversation that may involve current events, certain happenings in our lives, pet peeves, outdoor industry trends…I think you get the picture.

Occasionally, Michelle and I will invite others to join us on the podcast to get other perspectives on matters or to share a certain outdoor expertise.   With that in mind, we also encourage listener involvement.   Drop us an e-mail through our respective blog sites and we might use YOUR thoughts on a future episode.   We appreciate your feedback and we welcome the opportunity to engage our listeners in this fun auditory manner.

Well, enough of this introductory podcast talk.   How about we get down to business and listen to that first episode?   Please give us a listen and be sure to add us to your podcast aggregator so you don’t miss a single episode.   You’ll find us available in the following locations: 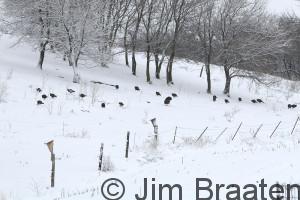 Outdoors Bloggers Sometimes Frustrate The Hell Out Of Me

I’m not going to mince words.   At times hunting and fishing bloggers frustrate the hell out of me.   Even though I tend to think we are a fairly tight-knit group sharing common passions, when it comes to organizing and learning together it’s like waving a braided garlic rope in front of a vampire.   Outdoors bloggers tend to quickly disappear for the hills…with gun or bow in hand, I might add.

Seriously, there’s something a bit different about outdoors bloggers that I can’t quite understand.   I get it that most bloggers have a limited amount of free time in their lives for both blogging and enjoying the outdoors.   I also get it that a person can be hunting and fishing nearly any time of the year so why waste a day sitting in a class or meeting with other bloggers.   But what happened to the notion of enhancing the writer’s craft through skill building and networking?   Seems to me great opportunities are being lost here.

What a shame.   I sometimes wonder if hunting and fishing bloggers place any priorities on skill building.   I mean, let’s face it…there are many ways to communicate the outdoors experience.   But to do it with even a modicum level of journalistic skill does not come naturally to a person.   It requires some training and my guess is most bloggers are not trained writers beyond, perhaps, a college level introductory composition class.   Just a guess.

And that’s where learning to become a better blogger comes in.   Most of us have it down how to become better anglers or hunters, but if you want to call yourself an outdoors blogger being good at a particular sport is only one facet to being an outdoors blogger.   The communication component needs attention and nurturing, too.

Now, this criticism is not directed to bloggers who may belong to various regional or national writing organizations.   I understand with annual conferences and gatherings they get their share of networking and craft building.   Nope, my criticism today is with the outdoors blogger who sits at home and never interacts face-to-face with other bloggers.   It is my sincere hope this blogger recognizes on many levels the benefits of meeting other bloggers and improving on their communication skills.

Quite honestly if you expect to achieve longevity in any task (whether it be blogging, etc.) you must feed the beast to keep it alive.   Meeting with other bloggers has a way of recharging a person’s batteries with renewed enthusiasm.   For me, attending a blogger conference or gathering also allows me to do some deep introspection in terms of where I am going with my blog.

In closing, I am here to tell you that blogging holds some exciting possibilities in the coming years for those who excel at it.   If you’re contemplating starting a blog, why not start today.   If you’re already a blogger pledge to become an even better blogger.   Either way, it pays big dividends to get out and to meet other bloggers when they gather to learn.