Hunters Must Know What’s Inside Their Sausage

Last week the UPS man handed me a package at the doorway and then proceeded to hand me something else I was not quite prepared for.   It was a nice gesture on his part.   Rolled up in some butcher paper was venison stick sausage he had just made the previous weekend.

“Go ahead, take one” he said.   In my mind I thought…do I have to?   I mean, the visual was gross upon first inspection.   Worse yet…when I picked up a meat stick the casing was loose and all slimy.   My stomach started to churn and I suddenly became queasy about the prospect of eating it.   Honestly, I have seen coyote bait I would be more tempted to put in my mouth than this gift now being offered to me.

Being the gracious customer I am, I took a stick…thanked him…closed the door…and quickly walked to the trash can where it was deposited with a slam dunk.   YUCK!   As I washed my hands I wondered how could anyone put such a disgusting item inside their mouth?   Hell, I didn’t even want to touch it with my bare hands.

During our brief conversation he admitted this was his first attempt at sausage making and didn’t really know what he was doing.   Really?   I would have never guessed.

Unfortunately, this scenario plays itself out thousands of times each year with sportsmen looking to save $300 or more by doing their own meat processing.   Now, while I applaud the effort…it takes more than just desire to be a good sausage maker.   In fact, it takes more than just watching a YouTube video, reading an article on the web or even following a good book on the subject.   Sausage making is an art form and the mere act of squeezing ground up venison into a sausage casing does not in itself make for a culinary masterpiece at the table. 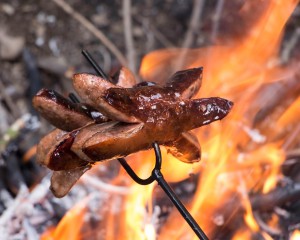 Initially when I attended the University of Minnesota back in the early ’80s I had an emphasis in meat science.   Of course, I’m not saying that a person has to be college educated in the science to be capable at producing good, wholesome meat products.   Yet, it doesn’t hurt.   In fact, I would say that to handle meats on only a casual basis just one or two times a year is a recipe for failure.   What may seem simple can be much more complex than meets the eye—especially when sausage products are involved.

I get it that hunters don’t savor the idea of paying anywhere from $5–15/pound for sausage when THEY HAVE SUPPLIED THE MEAT and a commercial processor does their magic.   Still, I contend that saving a few dollars per pound on meat that is barely edible compared to meat expertly handled by a true professional is not a good value.   The point at which a hunter has to decide if they are going to pay someone else to process their meat or do it themselves is a critical decision point. 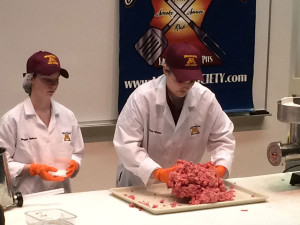 First off, let me clarify something here.   This post is not talking about the hunter who simply butchers his/her own deer up into roasts, steaks, and ground meat product.   Instead, I am talking more about the hunter who intends to cure, smoke or somehow fashion a specialized meat product using casings.   This goes far beyond the basics of butchering as, depending on the product produced, you are now preparing meat where some fundamental knowledge of food science is required.

Please understand I’m not trying to scare people off from processing their own meats at this higher level.   Heavens no.   What I am suggesting, however, is if you want to extend your skills beyond the basics of butchering a hunter has to be prepared to take on a new skill that is not always easily or quickly learned.

I still contend that far too much meat handled by hunters soon becomes a product not wholesome by current accepted meat industry standards.   That is another issue for another day…but it is critical to this entire endeavor.   Once meat has gone bad there is no amount of seasonings, smoking or preparation techniques that will save it.   Good venison begins once the animal is shot.   In fact, one might say it begins even before that by taking proper shot placements on the critter. 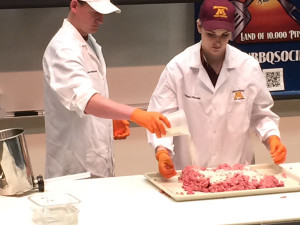 As I told my UPS man you can’t just go to a Cabela’s or other type of outdoor store to buy the equipment and automatically expect favorable results.   A hunter needs to take a class or somehow get the proper training.   Heck, my hunch is many meat processors would be willing to give a hunter an hour or two’s worth of training in exchange for some helpful assistance.   That’s what a person has to do if they are serious about home sausage making.

In Minnesota, much like I’m sure is available in many other states, the DNR has a fall class in cooperation with the University of Minnesota Meat Science Department to learn how to properly handle venison and make sausage products.   For more information on 2015 fall classes click HERE to inquire.

Moreover, once a person learns about the sausage making craft it’s highly likely their skills and interests will venture far beyond the basic supplies available at typical sporting outlets.   One good source I’ve found is PS Seasoning & Spices in Iron Ridge, Wisconsin.   Contact them to request their most recent catalog.   It will inspire you with new product ideas AND it will open up many new avenues of equipment to correctly get the job done.   Certainly other fine sources are also available, such as Nassau Foods or The Sausage Maker. 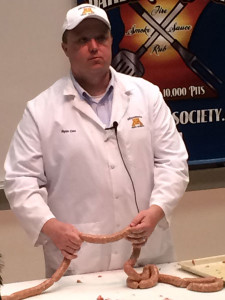 So, are you curious about what my UPS guy did wrong in his first sausage making attempt?   First off, he used the wrong casing for the meat product he intended to make.   He used a casing intended for use with a fresh meat product (to be cooked or grilled) not one that was intended to be smoked (and then eventually consumed cold).   He didn’t know…all he cared about was buying a sausage casing not realizing there were differences.   He certainly learned his lesson the hard way.   So did the people who tried to stomach his venison food gift.

For safety’s sake when it comes to food handling all sportsmen deserve to know what they are doing.   Don’t guess.   Learn.   It’s one thing if the meat is only going into your digestive system.   It’s entirely another potential risk when you serve others, particularly the elderly or young children.   I’ll be the first to admit there is nothing wrong with taking your venison to a professional processor.   On the other hand, if you aren’t completely sure about your skills handling your own venison you have no business taking on such an important task until you do.